Source: The Journal of the American Medical Association 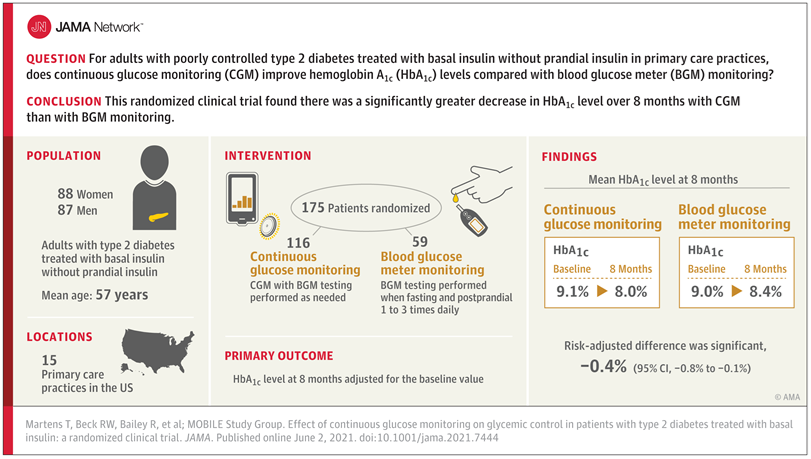 The ALERTT1 trial is the first 6-month, multicenter, prospective, randomized controlled trial comparing rtCGM with isCGM in 254 adults with type 1 diabetes, who previously used isCGM. Mean HbA1c was 7·4% (58 mmol/mol) and a minority of the study population was hypoglycemia unaware (44 [17%] people) or had a history of severe hypoglycemia (29 [11%]). Most (205 [81%]) were treated with multiple daily injections. Findings showed that in an unselected group of people with type 1 diabetes, 6-month use of rtCGM with alert functionality improved time in range (70–180 mg/dL [3.9–10.0 mmol/L]), while HbA1c, time in clinically significant hypoglycemia (< 54 mg/dL [3.0 mmol/L), and hyperglycemia (180 mg/dL [10.0 mmol/L]) were reduced. Additionally, more people on rtCGM achieved glycemic targets as defined by international consensus guidelines, and had less frequently severe hypoglycemia. Moreover, rtCGM users experienced less hypoglycemia worry and higher treatment satisfaction at the end of study.

Effects of Continuous Glucose Monitoring on Metrics of Glycemic Control in Diabetes: A Systematic Review With Meta-analysis of Randomized Controlled Trials

Key Takeaway: In a 16-week trial funded by the NIDDK and Tandem Diabetes Care, 101 children ages 6-13 with type 1 diabetes were randomized to a closed-loop system of insulin delivery (n=78) or the control group (n=23) where patients used a sensor-augmented insulin pump.  Children using the closed-loop system, consisting of a t:slim X2 insulin pump with Control-IQ  technology and a Dexcom G6 CGM, saw a significant time in range (TIR) improvement (target 70-180 mg/dL) from 53% at baseline to 67% (equivalent to 3.4 more hours per day; p<0.001) at the end of the study.  The control group saw a smaller TIR increase from 51% at baseline to 55% at the end of the study.  Notably, TIR increased most significantly overnight with children reaching 80% overnight TIR compared to 54% in the control group.  The treatment effect was evident in the first month and appeared consistent over 4 months.  Control-IQ technology demonstrated benefits across a broad range of baseline characteristics and proved easy to use for children and their parents.

Key Takeaway: Six-month, multicenter, randomized controlled trial using the Dexcom G5. The baseline population had diverse racial/ethnic backgrounds (38% Hispanic or non-white), high baseline HbA1c levels, and 41% had public health insurance. The trial showed a 0.4% A1c advantage in favor of CGM over BGM (p=0.01; baseline: 8.9%). Moreover, more than twice as many in the CGM group as compared to the BGM group achieved an A1c reduction ≥0.5% (44% vs. 21%, p=0.005) and over four-times as many participants in the CGM group vs. the BGM group saw an A1c reduction of ≥1% (25% vs. 6%, p=0.003). The CGM group also saw a 1.7 hour/day advantage vs. BGM on time-in-range (70-180 mg/dl) (p<0.001). Over two-thirds of the CGM group were using CGM at least five days/week by the end of the six-month study – the highest CGM use observed for adolescents in a study to date. Moreover, the CGM group reported significantly higher glucose monitoring satisfaction, measured via the Glucose Monitoring Satisfaction Survey score, at 26 weeks than the BGM group . Newer models of CGM devices that eliminate fingerstick calibration should lead to improved wearability and glycemic control even beyond the measured benefits observed in this trial. Improved glycemic control early in diabetes duration may prevent diabetes complications later in adulthood, making CGM an attractive option for this population. 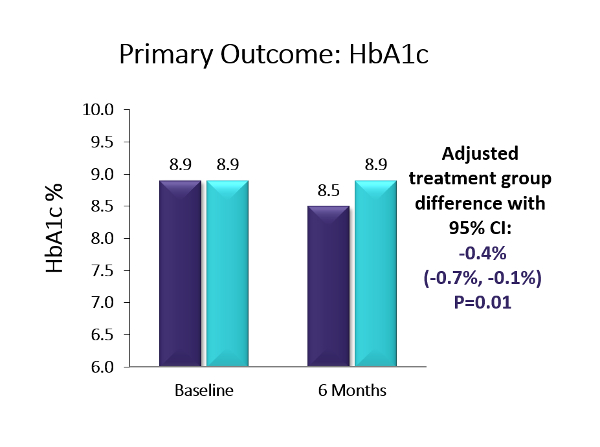 Key Takeaway:Older populations are more prone than younger populations to severe hypoglycemic episodes, which in turn contribute to dementia, risk of falls, glycemic variability, and mortality. To study whether CGM could reduce hypoglycemia incidence, Pratley and colleagues performed a randomized clinical trial that compared the effect of CGM (n = 103) with BGM (n = 100) in older adults (median age, 68 years) with type 1 diabetes in 22 diabetes centers across the US. The primary outcome was reduction in hypoglycemia (glucose <70mg/dL) over 6 months. Results showed that the median time in hypoglycemia was reduced from 73 minutes to 39 minutes per day in the CGM group compared with no change (from 68 minutes to 70 minutes per day) in the BGM group, an adjusted between group reduction of 27 minutes per day (95% CI, −40 to −16 min/d). Additionally, the median percentage of time with blood glucose levels below the range for severe hypoglycemia (glucose <54mg/dL) reached the goal per international guidelines (<14min/d in older adults). Moreover, only 1 severe hypoglycemic event (glucose <54mg/dL) occurred in the CGM group vs 10 in the BGM group, with 5 of those events involving seizure or loss of consciousness. 83% of participants in the CGM group used CGM at least 6 days per week during month 6 and the results did not differ by level of cognitive impairment, education level, or age. In summary, CGM reduced the time spent in the severe hypoglycemic range, which has health care use, mortality, morbidity, and economic benefits. 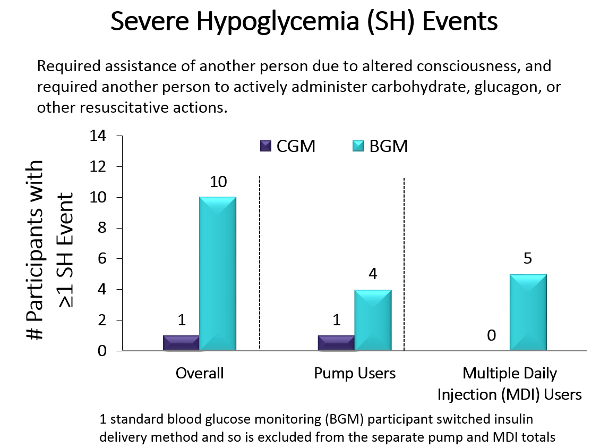 Key Takeaway: In the DIAMOND RCT, patients using multiple daily injections of insulin with type 1 diabetes who were randomly assigned to real-time CGM (rtCGM) had improved glycemic control vs. the SMBG group. This benefit was seen across patient groups regardless of baseline A1C, age, education level, or math ability. In addition, the rtCGM group spent 79% less time in nocturnal hypoglycemia, and also demonstrated a greater increase in hypoglycemic confidence and a greater decrease in diabetes distress vs. the SMBG group.

Key Takeaway: Among the real-time CGM (rtCGM) users, the change in HbA1c was greatest in the highest HbA1c subgroup with similar decreases seen in both the T1D and T2D groups. Notably, adherence remained high in those with baseline HbA1c > 9% and the improvements seen were achieved without the need for additional medications. Thus, the costs of rtCGM in patients with high HbA1c may be offset by avoiding treatment intensification and the longer-term savings achieved by lowering HbA1c levels in poorly controlled diabetes populations. 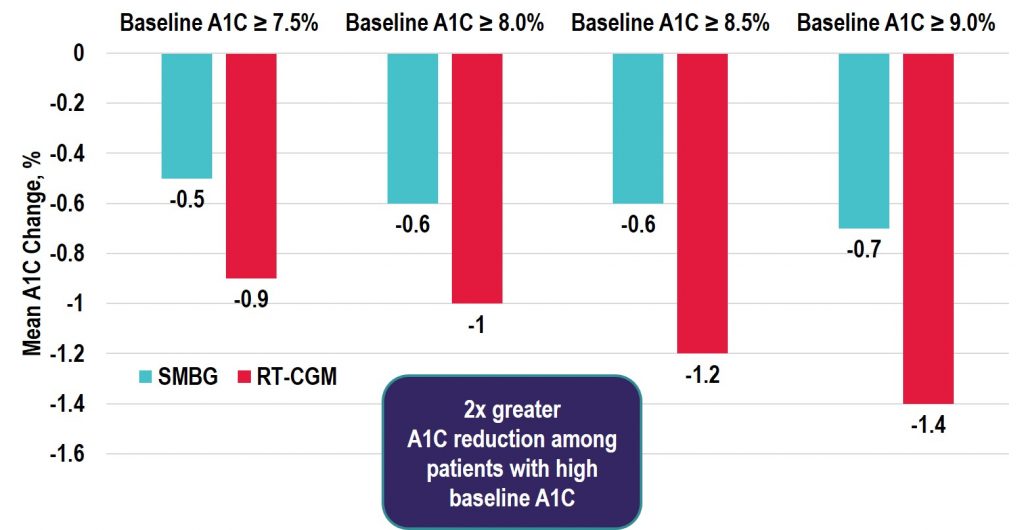 Key Takeaway: In the GOLD trial, glycemic control was improved with use of rtCGM compared with conventional treatment; however, increases in A1C and hypoglycemic events occurred when patients reverted back to SMBG during the crossover/washout period, suggesting that the effectiveness of CGM depends on uninterrupted use during treatment with MDI. Additionally, the study showed reductions in severe and nocturnal hypoglycemia as well as in glycemic variability and improved hypoglycemic confidence for rtCGM users. 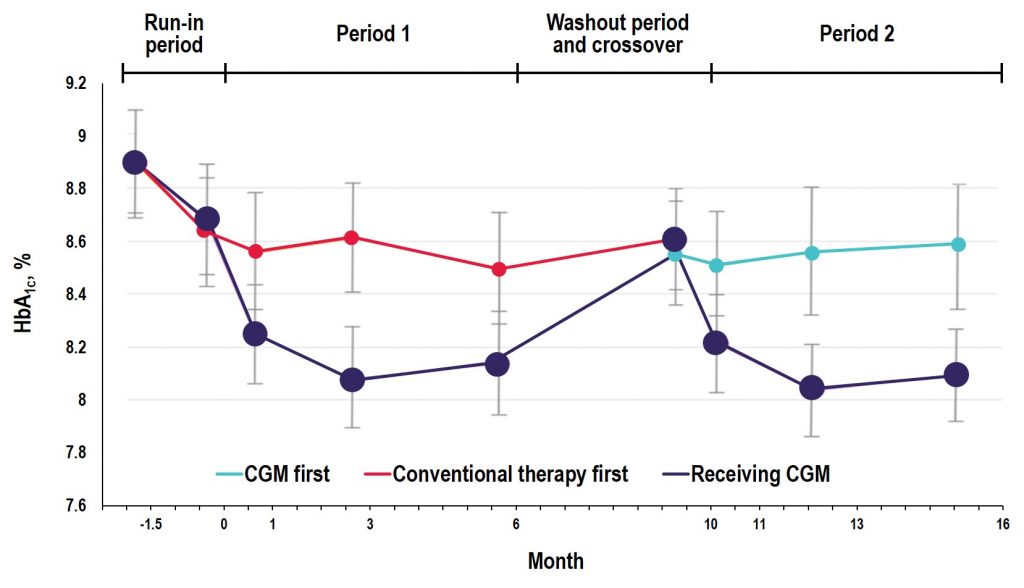 Glycemic Outcomes in Adults With T1D Are Impacted More by Continuous Glucose Monitoring Than by Insulin Delivery Method: 3 Years of Follow-Up From the COMISAIR Study

Key Takeaway: The COMISAIR study is the longest running real-world real-time CGM (rtCGM) study performed to date. In this study, the continuous use of rtCGM had a sustained and durable benefit with regards to glycemic control over a 3-year time period, with rtCGM being superior to self-monitoring of blood glucose in reducing A1C, hypoglycemia, and glycemic variability in individuals with type 1 diabetes regardless of their insulin delivery method.

Key Takeaway: This 6 month randomized trial showed use of a closed-loop system using the t:slim X2 insulin pump with Control-IQ Technology, (Tandem Diabetes Care) and a continuous glucose monitor (Dexcom G6, Dexcom) was safe and effective compared to sensor-augmented pump therapy (SAP). Participants in the closed-loop group achieved 70% time in range overall which meets the International Consensus Guidelines for people with diabetes. The closed-loop group also achieved significant improvements in hyperglycemia, HbA1c, mean glucose, and hypoglycemia (< 70 mg/dL < 54 mg/dL) as compared with the SAP group. Glycemic benefits were seen in the first month of the trial and were sustained over the entire 6-month period. Over 90% of participants said they trusted the device and found Control-IQ technology easy to use.

*Full article available for a fee

Key Takeaway: This study conducted in Europe with over 300 participants found novel flash glucose testing reduced the time adults with well controlled type 1 diabetes spent in hypoglycaemia. Future studies are needed to assess the effectiveness of this technology in patients with less well controlled diabetes and in younger age groups.

Flash Glucose-Sensing Technology as a Replacement for Blood Glucose Monitoring for the Management of Insulin-Treated Type 2 Diabetes: a Multicenter, Open-Label Randomized Controlled Trial

A1C From Baseline to 12 Months After Initiation of isCGM